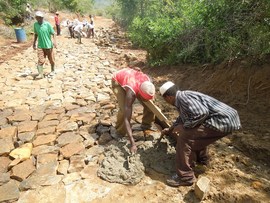 The local community constructs a slab in Minyala
Together with the UN World Food Programme (WFP), KIHO contributed with a “Food for Asset Creation” program to the increase of food security in three villages in Same District (Minyala, Suji and Tae) through better market access of small-holder farmers. These new roads will increase their potential income in the future in a sustainable way because of less transport costs and less decay of their products because of faster transport. Both increases food security as well increased income for small-holder farmers.

From October 2012 to March 2013, KIHO supervised the implementation of the project as a cooperation partner of WFP. In addition, Same District Council provided technical advice and support for the road construction. In order to achieve a successful implementation, each respective village formed a road construction committee as well as a food distribution committee. Their task was to identify people from the village that were eager to contribute with their labour but were also in need of support after a bad harvest. The work of these local committees guaranteed local ownership of the process and a successful involvement of the villagers.

Due to changing rainfall patterns, these villages do not receive the amount of water as they used to in the past. Heavy rainfall is increasing while there are longer periods of drought. In short, there is a higher insecurity when crops should be planted as traditional patterns can hardly be followed any more. The project of WFP made sure that these farmers who were involved had increased food security during volatile times and thanks to a better market access continue to do so in the future.

The main challenge of this project were constraints in the available budget. There was not enough money available to produce enough slabs and culverts. In addition, it was hard for the villagers to find adequate storage space for the food delivered by WFP. Also, sometimes it would have been necessary to work on the roads but the people, who are smallholder farmers, had to work in their fields instead.
Successes:


Our Aim:
KIHO wants to finish the Phase II in Minyala and construct a market access feeder road in Mhero village that will connect Bere and Ireti sub-villages with the main road. Currently, there are only pathways available which makes the transport of agricultural goods to the market very difficult and leads to decay of the products.