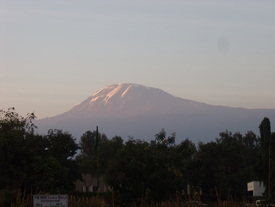 The symbol of our region: Mount Kilimanjaro
Location
Kilimanjaro Region is located in the north-eastern part of Tanzania and borders with Kenya to the north.

Geography
The areas in Kilimanjaro Region fall into two extremes. One part of the area is located in the lee ward side of the mountain hence it is dry and semi–arid. The lowlands are warm, dry and less densely populated. They receive an annual rainfall of less than 800mm deep.

The largest part of the region is mountainous, surrounded by Pare Mountains that range from the base of Mount Kilimanjaro, which is the highest mountain in Africa. This zone has increasingly become, and has always been, the most densely populated – even up to an altitude of 2,400m. Due to the steep hills, land has become very scarce in the region, and forced out-migration to other regions in Tanzania.

A smaller part of the lowlands in the west comprises of marshland, which goes along Pangani river. Contrary to the dry Maasai plains, this part of the lowlands can be cultivated. Thanks to water irrigation, many crops can be grown, namely maize, onions, tomatoes, rice, watermelons and cucumbers.

Business and people
Businesses and services are concentrated in Moshi town and the District headquarters as well as along the tarmac main route which runs from Moshi to Dar es Salaam. In the mountains farming is based on the cropping of banana, sugarcane, coffee, potatoes and yams, whereas in the lowlands the majority of the population, including the nomadic Maasai, are cattle-keepers.